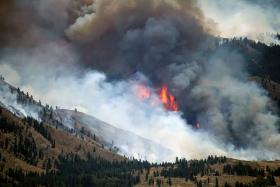 The Florida Forest Service has sent firefighters from around the state to three western states, to help battle wildfires and that number includes some local personnel.

“Specifically, a couple of different fires in Washington State; some in Oregon, one went to California recently, and Wyoming as well,” said David Smith, the Operations Administrator at Blackwater.

The main blazes are at Washington State’s Carlton Complex, which covers 250,000 acres and is reportedly about 70% contained; and the 396,000-acre Pine Creek wildfire in Oregon.

One of the challenges for the firefighters is dealing with the mountainous terrain, compared to what they see in Florida. Smith says their training as “wild land firefighters” helps offset that.

“For a wild land firefighter, the gear is much lighter,” said Smith. “Mobility is key. We have to be able to move and move quickly in woodland areas.”

Deployed wild land firefighters fill a variety of roles, including some that Smith says normally are not associated with actually putting out a blaze.

“Logistical areas, ensuring the firefighters on the line have the necessary supplies,” said Smith. “We have personnel that help plan the response to the different wildfires; personnel that specialize in aerial operations – fixed-wing or helicopters.” 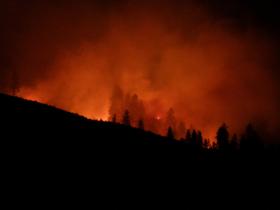 The eight firefighters are tentatively scheduled to serve a 14-day deployment – but that could change depending on circumstances. They could come home early or serve as many as 21 days before being rotated home.

Elsewhere, a wildfire near Sacramento, California destroyed 13 homes and 38 other structures. Crews battling a wildfire in Yosemite National Park were are working protect a small cluster of Giant Sequoia trees estimated at three thousand years old. Authorities say that fire was about 34% contained as of late Tuesday.