DoD deploys troops to support DHS and harden US border

In late October, the Defense Department announced it would deploy thousands of active-duty personnel to aid the Department of Homeland Security and U.S. Customs and Border Protection “to harden the southern border,” said Air Force Gen. Terrence J. O’Shaughnessy, the commander of U.S. Northern Command and North American Aerospace Command.

DOD will provide a range of assistance, including planning, engineering, transportation, logistics and medical support to the U.S. Customs and Border Protection enhancing their ability to impede or deny illegal crossings and maintain situational awareness as it contributes to CBP's overall border security mission.

The Secretary of Defense approved the following Title 10 (active-duty) forces and support in response to the DHS request:

Troops will be billeted in specific locations and will fan out along the border as needed in Texas, Arizona, New Mexico and California, although the report of 14,000 active-duty members recently quoted in many news sites is not in line with planning numbers, O’Shaughnessy said.

For over a week the media has been covering the large caravans of thousands of Central Americans making their way towards the U.S. southern border, although it may be weeks before any of them even get close to America.

Unfortunately the flood of illegals has been going on for decades, and is nothing new for U.S. Customs and Border Patrol. According to CBP, during FY 2018, a total of 396,579 individuals were apprehended on our Southwest Border between Oct 1, 2017 and Sep 30, 2018. In FY 2017, USBP apprehended 303,916 individuals along our southern border.

On a typical day, CBP says they process 1,088,300 passengers and pedestrians via air, sea and land and, of those, they…

Typically small groups of dozens or hundreds of people make the journey up through Mexico, but these caravans with thousands of Central Americans are being organized openly by several groups intensifying the immigration and border debate.

For example, in this video from 30-Oct a FOX News reporter revealed an organized bus operation loading illegal immigrants from the first caravan for rides in Mexico, as a second group was entering from Guatemala.

Also the attitude and violence is more pronounced with these groups. A few days after the first large group crossed into Mexico (most of them wading across the shallow Suchiate River), a second group back in Guatemala was more unruly. 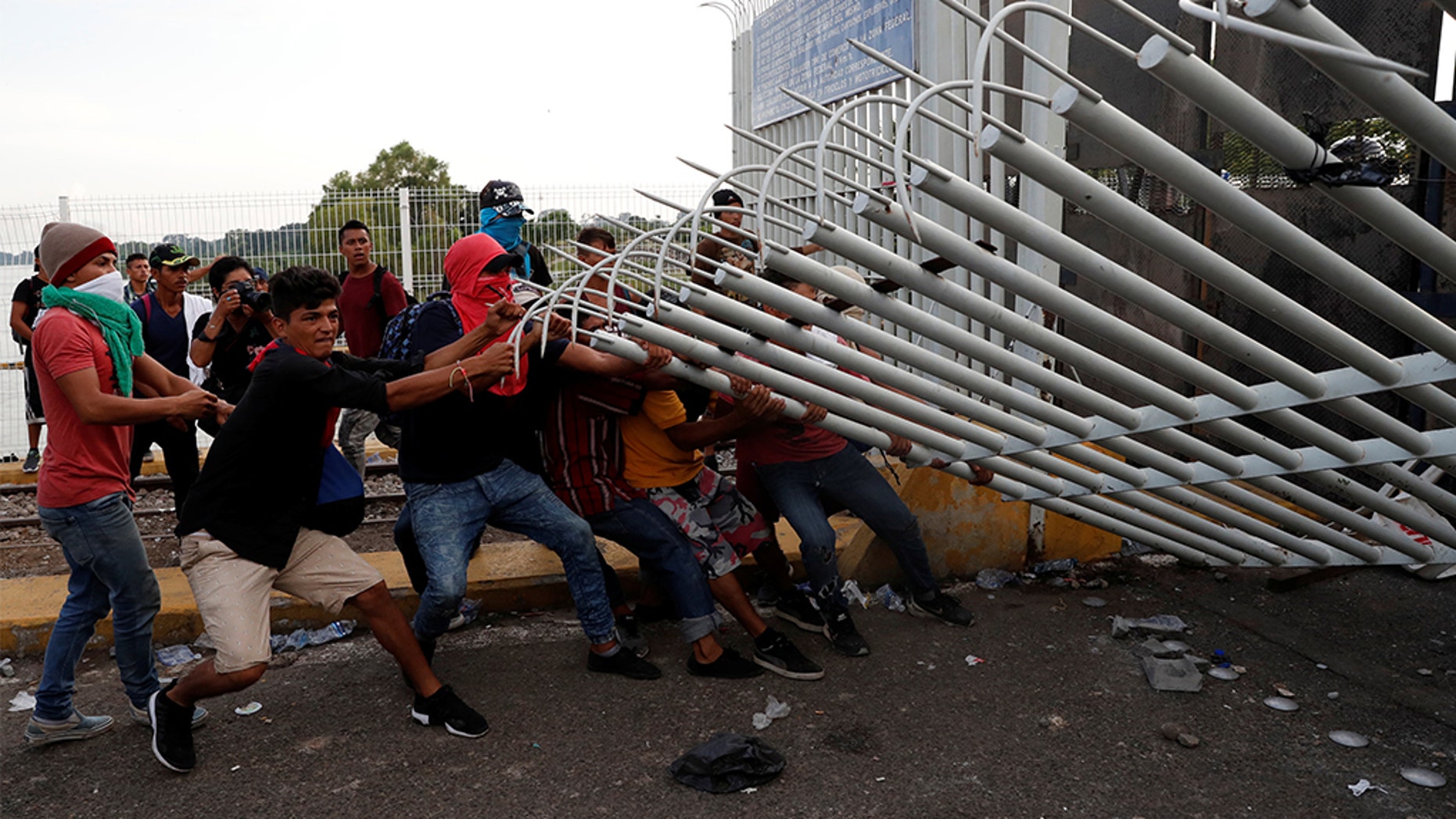 Guatemala's Interior Ministry said several Guatemalan police officers were injured when the mostly male group broke through border barriers on Guatemala's side of the bridge.

Mexico authorities said migrants attacked its agents with rocks, glass bottles and fireworks when they broke through a gate on the Mexican side, but were pushed back, and some allegedly carried guns and firebombs.

Mexican Interior Secretary lamented what he called a second 'violent attempt' to storm the border, accusing people of placing the elderly, pregnant women and children at the front, putting them at risk of being crushed. Now Mexico has the unprecedented situation of having 4 caravans with about 6,000 to 7,000+ migrants total stretched over 300+ miles (500 km) in southern states of Veracruz, Oaxaca and Chiapas.

The Mexican government has offered all of these people temporary work visas, asylum and social benefits, as well as transportation home.

Nearly 3,000 from the first caravan applied for refuge and about a thousand have returned home, but the rest rejected Mexico’s offer of jobs and services, none have applied for asylum there, and they all want in the U.S.

According to Arizona Central (who has a caravan tracker map in article), immigration observers in Central America say caravans have become popular for security reasons as migrants bet on strength in numbers. As groups wind their way through Mexico, media outlets provide coverage and organizations such as the U.N. High Commission for Refugees and state human-rights commission monitor the migrants’ progress — dissuading police from launching mass action against them, they say.

Caravans also allow migrants to forgo paying "coyotes", who demand between $8,000 and $13,000 for the trip, and some cartels charge a fee to cross the U.S. border in areas with weak barriers.

As these groups continue from Veracruz up along the Gulf side of Mexico towards southern Texas, they will be traipsing through cartel country ~ primarily Jalisco New Generation, Los Zetas and Gulf Cartels.

The central and western borders of Texas, New Mexico and Arizona are predominately Sinaloa cartel (see above 2017 map), with El Paso area of Texas controlled by the Juarez cartel.

As of early November, most estimates say these large groups are 2 to 4 weeks away from the U.S. border, but again, these illegal crossings and lax immigration policies have been going on for decades challenging U.S. homeland security officials and the country in general.

This is not a political post but rather a thread to share some background on the situation and updates on DOD's border support efforts going forward. And please feel free to share your thoughts in comments below too.

USFRA StaffPermalink Reply by Janet Liebsch on November 5, 2018 at 6:14pm

from DHS.gov 1-Nov-2018 - Myth vs. Fact: Caravan - Below are the facts surrounding the “caravans” en route to the U.S. Southwest border.

Q: Do we know who is in the caravan?

A: We continue to be concerned about individuals along the caravan route. In fact, over 270 individuals along the caravan route have criminal histories, including known gang membership. Those include a number of violent criminals – examples include aggravated assault with a deadly weapon, armed robbery, sexual assault on a child, and assault on a female. Mexican officials have also publicly stated that criminal groups have infiltrated the caravan. We also continue to see individuals from over 20 countries in this flow from countries such as Somalia, India, Haiti, Afghanistan, and Bangladesh. There is a large segment of this population that we know nothing about and we must be prepared to defend our border and enforce our laws to protect the citizens of our country.

Q: Are there criminals in the caravan?

A: Yes – so far, there are over 270 individuals along the caravan route that have criminal histories, including known gang membership.

On October 29, the Mexican ambassador to the U.S. described some of the caravan members as “very violent:” “Unfortunately, some of the people in the caravan have been very violent against authority, even though they have offered the possibility of entering in compliance with immigration law and refugee status.”

On October 30, Mexico’s Interior Minister Navarrete Prida speaking on Radio Enfoque (Focus) 100.1 FM, confirmed that some criminal groups have infiltrated the caravan: “I have videos from Guatemala that show men dressed in identical clothing, sporting the same haircuts, handing out money to women to persuade them to move to the front of the caravan…We know, for a fact, that some members of the caravan threatened [Mexican] Migration Institute personnel and we have images showing many of them preparing Molotov cocktails.”

Q: Is the caravan only women and children?

A: No, reports on the ground from our foreign partners suggest that approximately 50 percent are single adults. However, the Guatemalan Intel Minister said that the caravan is employing tactics to push women and children to the front to act as human shields as the caravan pushes against its military forces.

Q: How many troops will be deployed to the Southwest border?

A: By November 2, there will be approximately 5,200 deployed to support U.S. Customs and Border Protection (CBP) at the Southwest border as part of Operation Faithful Patriot. This is in addition to the 2,000 National Guardsmen currently deployed for Operation Guardian Support.

Q: When do you expect the caravan to arrive at the border?

A: Current estimates indicate that the caravan could arrive between four days and two weeks (from October 31) depending on the mode of transportation and whether they make any prolonged stops.

Q: Why do you need to deploy the armed forces to the border?

A: The potential for large groups – who have already showed a propensity to using violence to achieve its objective – presents a unique safety threat to our nation and Border Patrol personnel as well as to the security of the American people. We have already witnessed these groups forcibly encroach upon foreign borders and have engaged in violence when confronted by those governments.

Q: Why are we seeing caravans heading towards our Southwest border?

A: Our nation is experiencing an unprecedented crisis on our Southern Border that is the result of loopholes that prevent the detention and repatriation of illegal alien minors and family units. FY18 is the highest number of family unit apprehensions on record – it is more than 40% higher than any previous year on record. As a result of these loopholes, when illegal alien minors or adults traveling with minors unlawfully enter the United States, rather than being detained and removed, they are released into American communities. Once released, those who have no legal right to stay are almost never removed. Knowledge of these loopholes has led to a dramatic transformation in the population of those seeking to enter our country illegally.

Q: Will you allow the caravan to enter the United States?

A: We will not allow a large group of illegal migrants attempt to enter into the United States if they have no lawful right to gain entry.

Q: Will the caravan be allowed to seek asylum?

USFRA StaffPermalink Reply by Janet Liebsch on November 6, 2018 at 10:46am